Transgressive Fashion in the Victorian Era 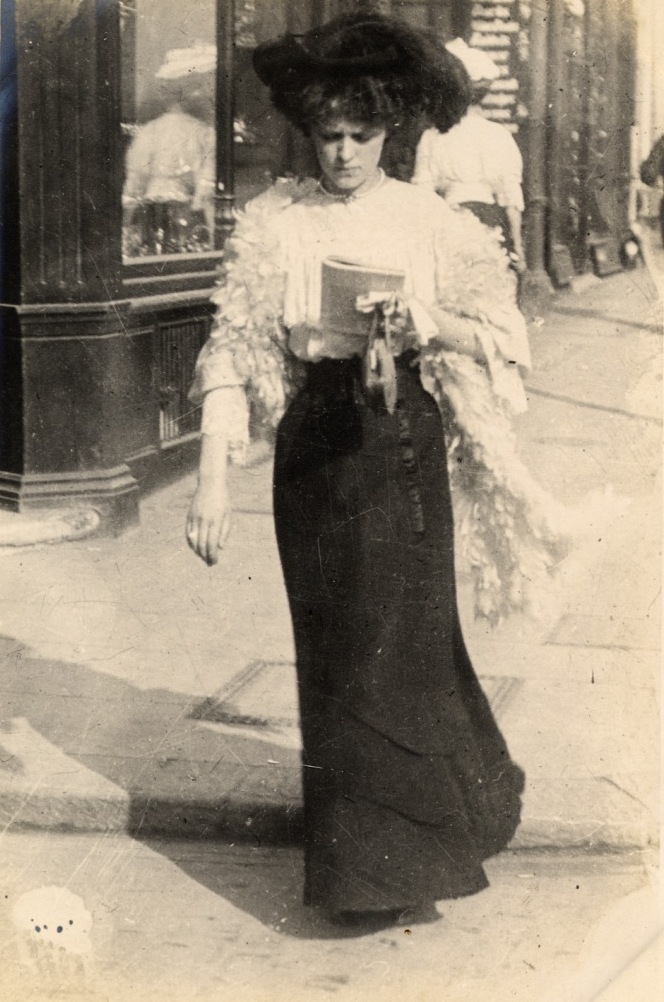 While (sadly) perusing the latest in Hollywood gossip a few days ago, I was fairly surprised to see this post on ‘Edwardian Street Fashion’ as photographed by Edward Linley Sambourne at the Daily Mail website. The Daily Mail has in fact been featuring some surprisingly good dress history-related posts lately, as evidenced by featuring an amazing find, a cache of 16th century lingerie (thanks to The Dresser for tipping me on that). But I digress… well, actually, it sort of relates. 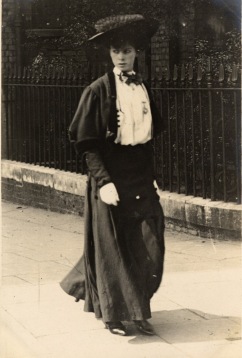 Much like the fantastic contemporary Sartorialist, Sambourne captured images of Victorian & Edwardian women on the street (ex. figs. 1-2) – to the eternal gratitude of fashion historians like me. However, what the Daily Mail missed reporting – which their readers would have eaten up – is that Sambourne shot these photos with a hidden camera. That’s right, ol’ Linley was a bit of a voyeur, and the majority of these photos were taken with his subjects unaware. A visit to the source of this article (which the DM of course failed to mention), the wonderful blog of the Royal Borough of Kensington and Chelsea Libraries, reveals a bit more:

Linley Sambourne was by 1906 the chief cartoonist of Punch. He’d had a four decade long career as a cartoonist and illustrator. He was also an enthusiastic amateur photographer. He had taken up photography as an aid to his art. He was a skilled draughtsman, obsessed with getting details correct but he preferred to work with a model. Photography gave him the ability to take pictures of family, friends and professional models which he could use as the basis for his cartoons. He took thousands of pictures in his lifetime most of them for reference purposes including dozens of images of military uniforms, national dress, models in pseudo-classical costumes and fancy dress of all kinds. His wife Marion complained in her diary that photography had become as much an obsession as a hobby… The one difference between Sambourne’s street photography and the pictures taken by modern style bloggers is that for the most part his subjects had no idea they were being photographed. Sambourne used a concealed camera.[1]

His great-grandson, Lord Snowdon (himself a photographer of some note), described seeing the camera (amongst several others) in his youth, on one of his explorations of the wonderful house, 18 Stafford Terrace (now a museum), Sambourne left behind: ‘… one in particular caught my eye. Designed to take pictures at right angles to the direction in which it was being pointed, it perhaps explains the numerous photographs of girls in the archive, who are apparently unaware that their walk to school along Kensington High Street is being recorded for posterity!’[2]

Now it might be unfair, based on this sneaky habit, to infer that ol’ Linley was a bit of a perv. Except… he kind of was, at least by Victorian/Edwardian standards. It would seem that Linley also photographed his models at his home (when family was away), and sometimes in the studio of a friend, quite nude. Er, the models were nude… the sartorial state of Linley is uncertain. He left behind a wonderfully saucy and sensuous collection of images which are also in the collection of RBKC archives – but which, understandably, they can’t exactly make a family-friendly blog post about! Luckily for you, dear reader, I certainly can write about them here.

Sambourne’s photographs were the focus of the 2001 Leighton House exhibit Public Artist, Private Passions: The World of Edward Linley Sambourne, curated by Reena Suleman and Alison Smith. Two facts of note which make this collection rather significant: Sambourne was a ‘born taxonomist’ as Martin Postle puts it, and meticulously recorded not just the catalogue of his photographs, but the names, addresses, and sittings of his models as well; secondly, he had learned the art of photography from start to finish, making his own prints, and thus enabling him to keep his images private.[3]

As Smith points out in the catalogue for this exhibit, many of the nudes Sambourne photographed were done for modelling purposes for his illustrations. For example, a photograph of frequent model Kate Manning served as the basis for an 1888 illustration for Hans Christen Anderson’s The Little Mermaid. 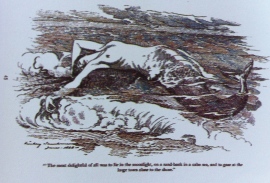 Likewise, the Pettigrew sisters, famous models for the Victorian artistic elite (they modelled for Millais as girls, then Leighton, Whistler, Prinsep, Hunt, etc., etc.) posed for Sambourne on several occasions – often enough to cultivate trust, as he ultimately photographed them naked together, ‘including several in which they engage in an energetic mock wresting match.’[4] 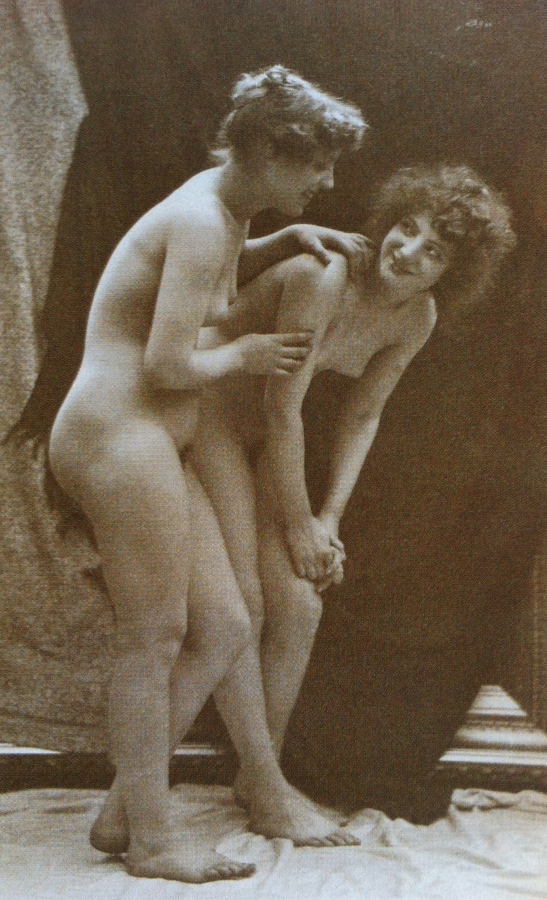 Thus, although many of these photos can be argued to have an artistic function (some of the Pettigrew shots were used as a model for illustrations for the Dover Street Bathing Club), they were certainly erotically charged.

And some were more than just ‘charged’. Sambourne captured some rather sexually explicit images of certain of his models, and it is hard to imagine they weren’t suggestive of an intimate relationship.

Photos of Maud Easton (figs. 3, 7, 8) taken between 1891 and 1893, for example, range from subtly sensuous to graphic displays. Postle explains:

Maud Easton posed nude in a variety of sensual poses, seated in a leather armchair and lying on a table. During the third session she performed a partial striptease holding a champagne glass, Sambourne describing her in his diary that day as a ‘Silly Girl’. A fourth session, on 30 September [1891], included a series of highly erotic photographs of her in a ‘Folly dress’ and a mask, her legs spread wide open. (After the session Sambourne complained of being hindered by the activities of workmen on the roof.) Whether these photographs were made solely for Sambourne’s own private delectation, or shared with male friends, is unknown.[5] 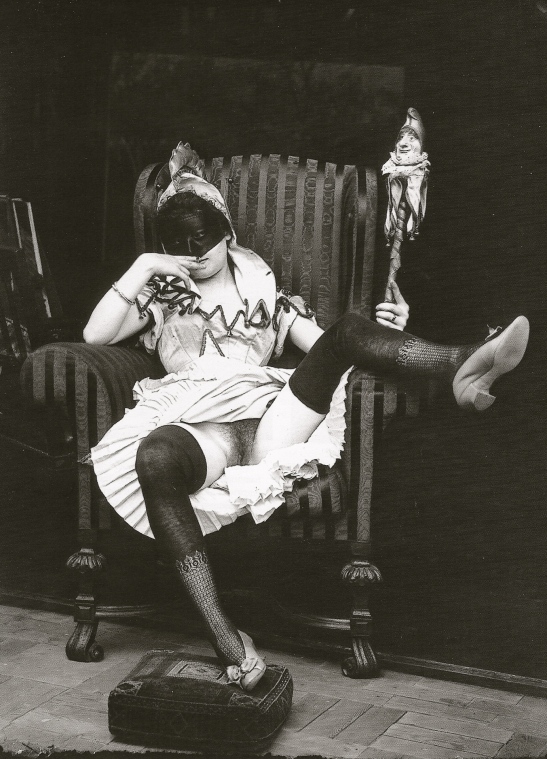 Sambourne’s almost anthropological interest in capturing human expression may have been driven by his voyeuristic tendencies. The result of his quirky nature is a fascinating record of Victorian artistic life, both public and very private. And both his covert street snapshots and his subversive intimate photographs leave an unprecedented sampling of everyday Victorian and Edwardian dress, and undress. I for one am incredibly grateful – it certainly makes my job entertaining, fascinating, and even a little bit scintillating.

I highly recommend the catalogue of the exhibition Public Artist, Private Passions: The World of Edward Linley Sambourne, which includes essays by Reena Suleman, Alison Smith, Martin Postle, Leoneé Ormond, Jerome McGann, Simon Popple and Colin Harding. It is for sale in the shop of the Linley Sambourne House, which might be worth a phone call rather than ordering it for a small fortune second hand.

3 comments on “The Original Sartorialist”

This entry was posted on July 22, 2012 by Robyne Calvert in Edward Linley Sambourne, Fans.

Visual Culture Historian: Art, Design, Architecture & Fashion - I wear many hats, all of them fabulous. Currently inspiring and infuriating young creative types at the Glasgow School of Art. 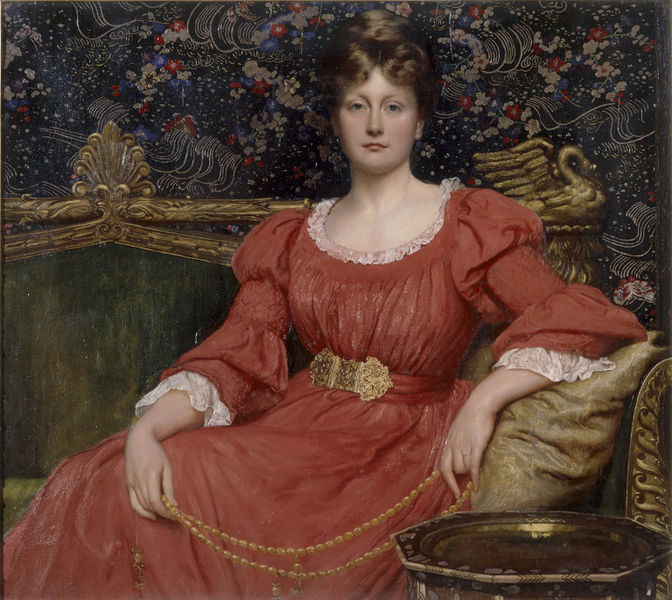 'Mrs Luke Ionides' by William Blake Richmond, London, 1882. Oil on canvas. Collection of the V&A, Museum no. E.1062-2003. Purchased with the assistance of The Art Fund and the Friends of the V&A.